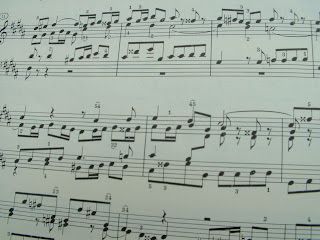 I volunteered to play the piano in church last Sunday. I have no idea what possessed me to volunteer, given my previous rabbit-in-the-headlights experiences. Although I can play the hymns perfectly in the emptiness of my own sitting room, I am invariably struck by the musical equivalent of Writer’s Block in front of an audience.

Child prodigy I was not. My piano teacher was a lonely spinster (am I still allowed to use that word?) whom I could manipulate into telling me her life story for the duration of the lesson. By the time the following pupil arrived, I had managed to avoid the piano entirely. So I saw no point in practising.

Probably the best-known composer for the piano is Frédéric Chopin (1810 – 1849), who was Polish. His father was French though and Chopin himself came to Paris in 1831 and stayed there for the rest of his life.

Now, he was a child prodigy. Already composing at the age of six and giving public concerts when he was seven, he was frequently compared to Mozart and Beethoven. His success as a composer and performer led him to Europe, where he stopped off in Paris and settled there for good.

In 1836, Chopin met the feminist author, George Sand, at a party. He didn’t fancy her much at first – in fact, he found her repulsive and asked, in a way that would do Prince Philip proud:

“But is she really a woman?”

Nevertheless, they became lovers. Their relationship was difficult as Chopin was often depressed and always ill. In 1847, Sand published a novel where one of the main characters bore a strong resemblance to Chopin and the portrayal was far from flattering. Chopin went into a big sulk and before the year was out, the relationship was over.

Camille Saint Saens (1835 – 1921) was another child prodigy and he was simply brilliant at everything. He had perfect pitch and began learning to play the piano when he was two. He wrote his first composition aged four and he was five when he first appeared in public.

Saint Saens had learnt to read and write by the time he was three. At seven, he was studying Latin. He was also a scientist, a mathematician, a philosopher, a poet and a playwright.

Oh – and he played the organ in church too, although I’m sure he didn’t stop half-way through a hymn mumbling “Hang on, hang on, I can get this bit…”

Saint Saens married a woman half his age when he was forty and had two sons, both of whom died within weeks of each other. He blamed his wife for the second death (the child had fallen out of a window) and left her. She never heard from him again. The fact that he was rumoured to be homosexual might have had something to do with it too.

He died of pneumonia in Algiers at the ripe old age of eighty-six.

Here’s the Andante from his piano concerto n°2:

He also earned his living as a church organist but he didn’t get on very well with the priest. This is because Fauré used to sneak out between hymns for a crafty cigarette and when he turned up dishevelled one morning after a night on the tiles, the priest asked him to resign.

In 1905, Fauré was appointed head of the Conservatoire de Paris where his ideas were considered far too modern for certain members, who promptly left. It was also around this time that he started to go deaf.

His love life was a bit of a shambles. Brought up by a wet-nurse and packed off to boarding school when he was nine, he wasn’t exactly familiar with normal family life. He married in 1883 but was hardly ever at home, due to his horreur du domicile. He also had several mistresses including the married singer Emma Bardac, who was also the mistress of Claude Debussy.

Fauré died of pneumonia in Paris at the age of seventy-nine.

The following clip should bring back comforting memories for those old enough to remember Listen with Mother. Here is the Dolly suite…are you sitting comfortably?

Claude Debussy (1862 – 1918) was born in Paris. He started taking piano lessons at the age of seven and entered the Conservatoire when he was ten.

Between 1885 and 1887, he studied at the Villa Medici in Rome. He didn’t like it much there either and complained about the company, the accommodation and the food. He didn’t even like Rome and got quite depressed about it all.

But his turbulent love-life surely provided relief from all that boredom. He was a heartless womaniser, having affairs with all sorts of women, including married ones. He left one girl for her best friend, Rosalie, a fashion model, whom he married. She turned out to be a bit thick and Debussy got bored again and embarked on an affair with the ubiquitous Emma Bardac (see above). When poor Rosalie found out, she tried to commit suicide by shooting herself and consequently most of Debussy’s friends turned against him. Well, he only had himself to blame…

Debussy’s other claim to fame is that he was one of the first people to undergo a colostomy operation. He eventually died an unromantic death from rectal cancer at the age of fifty-six.

Erik Satie (1866 – 1925) was born in Honfleur but moved to Paris when he was four. His mother was English (born in London to Scottish parents) and when she died in 1872, Satie was sent back to Honfleur to live with his paternal grandparents. When they died six years later, he went back to live with his father, who remarried shortly after.

Satie’s step-mother was a piano teacher. Either she wasn’t a very good one or – more likely – Satie was a bad student. When he began his piano studies at the Conservatoire in 1879, his teachers soon let him know he had no talent whatsoever and labelled him the ‘laziest student in the Conservatoire’.

He was sent away for two and a half years, but was readmitted in 1885. Unfortunately, he was still deemed to have no talent, so Satie stormed off to join the army. He managed to stick it out for four months and then, desperate to escape, he endeavoured to catch bronchitis by sleeping outside in the middle of winter with no shirt on. It worked and he was discharged.

He moved to Montmartre and began to hang out with all the arty types in Le Chat Noir café-cabaret. During this period, he started publishing his Gymnopédies – he was, after all, more gifted as a composer than a pianist.

In 1893, Satie met Suzanne Valadon, an artist’s model and an artist in her own right. After their first night together, Satie asked her to marry him. She wouldn’t and he became obsessed with her. She finally left him six months later and poor Satie was heartbroken. It appears to have been his only intimate relationship (so where was Emma Bardac when he needed her?).

He died, aged fifty-nine, of cirrhosis of the liver.

And on that cheerful note, I leave you with his Gnossienne n°1:

By the way, the piano playing at church went very well. There were a couple of moments where I inadvertently slipped down a semi-tone or two, lending an interesting jazzy element to What a friend we have in Jesus, but – hey – there’s nothing wrong with dissonance. If it was good enough for Debussy…