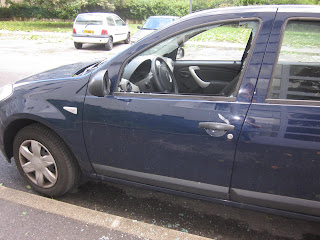 On Saturday morning, I was rudely awakened from my sleep by a neighbour shouting down the intercom “Madame, they’ve smashed your car, they’ve smashed your car! Get the police!”
As I was wearing a henna-stained nightie, two shower caps and a woollen bonnet, I couldn’t rush down immediately. However, once my Golden Oak locks had been rinsed and dried, I nervously made my way downstairs with a feeling of dread.
If I didn’t know better, I would say my car is cursed. The very first time I parked it in front of my flat, it got keyed. Then some drunken thugs backed into it, leaving a dent. Once, I had to call out the breakdown truck at two in the morning because the car just stopped as I was driving someone home. I still cringe at the memory of Mr Breakdown Man saying “Um – you’ve run out of petrol”. To be fair, I use LPG but nobody told me it needed petrol in order to run. Nobody ever tells me anything.
Then I had a violent tussle with a kerbstone in the rush hour and had to buy a whole new wheel.
And now this. 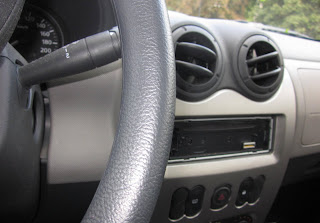 In fact, when I saw what they’d done to the car, I was relieved. Only the window was smashed and the radio-CD player stolen. Or rather, the façade had been stolen. I’m a bit thick when it comes to practical matters and I hadn’t realized that the façade was detachable and I was supposed to take it off in order to prevent people smashing the window to steal it.
I know now.
I took photos, like the police told me to, using the last of my precious ink to print them and photocopy all the documents they asked for. Then I spent two hours waiting at the commissariat and reading every single copy of Femme Actuelle and Auto Moto before a policewoman took my statement. She was far more interested in the fact that I’d been born in Cambridge than looking at my photos and kept throwing oddly inappropriate phrases at me in broken English.
I finally got through to the insurance company who told me they didn’t need the dépôt de plainte at all and that they couldn’t reimburse the radio or – and I swear I detected a snigger here – suggest how to extract the George Benson CD.
Thank goodness for Golden Oak Herbal hair dye, that’s all I can say. The stress of living here is turning my hair completely grey…