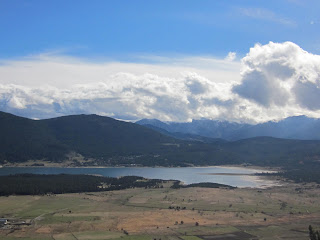 I am quite unable to resist the charm of
the Pyrenees…
I used to think that if you’d seen one
mountain, you’d seen them all – just some big pointy bits of rock covered in
snow and blocking the view. But when I went walking last summer in the Pyrénées
catalanes, I fell in love…
So I returned during the Toussaint
holidays, not squished into a tiny caravan this time but installed in a cosy and
horrendously over-furnished flat in Les Angles.
Les Angles is a ski resort, apparently a
very expensive one but frankly a bit of a dump in November when everything is
closed. In fact, until the ski resort was created in 1964, it was a pretty grim
place to live. Farmers had to contend with the unyielding earth and the harsh
weather: I experienced for myself the biting wind called le carcanet which blows
from the north and shrouds the village in a heavy, damp fog. In 1961, the
population was a mere two hundred and fifty and the village was slowly dying.

Today, the old village still stands,
surrounded now by restaurants, nightclubs and intimidating sportswear shops
(well, they intimidate me). Here is the view from our balcony – behind the
village church, you can just about spot the lac Matemale…and beyond, the
glorious Pyrenees… 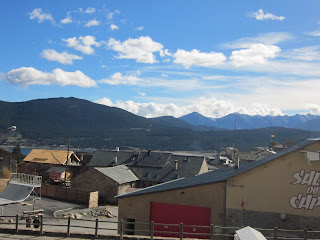 We walked for hours, through forests,
around lakes… 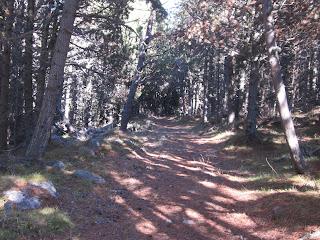 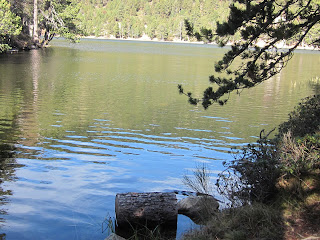 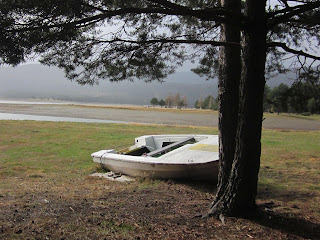 …and to Les Iglesiettes and the ruined
hamlet of Vallsera. The inhabitants were wiped out by the Black Death in the
fourteenth century and all that is left now are lichen-covered boulders and
dry-stone walls the colour of old bones… 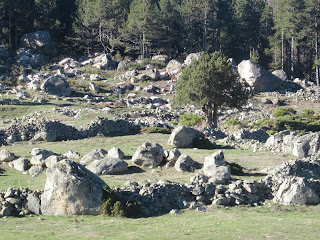 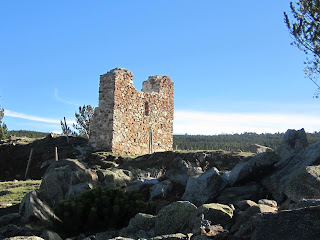 Down the road from Les Angles is a parc
animalier where you can see animals which live – or once lived – in mountainous
areas. Fortunately, most of them were safely enclosed behind wire fencing… 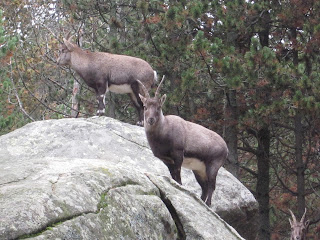 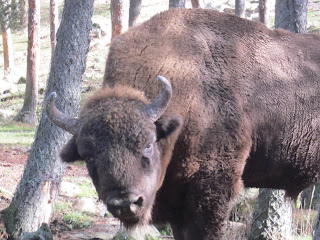 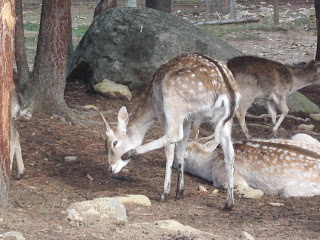 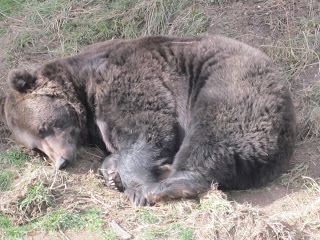 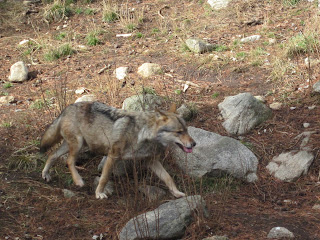 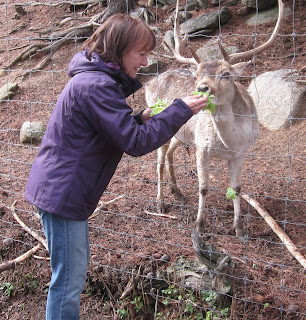 …the marmottes, however, were already fast
asleep.
A quick trip to Andorra, in the pouring
rain, rounded off the holiday. I was rather disappointed – it appeared to be
all banks and duty-free shops and people pushing trolleys full of booze and
cigarettes. A bit like Boulogne, really, without the sea…
I’m back in Grenoble now, back in the Alps.
Il n’y a plus de Pyrénées (to
quote Louis XIV) but I know it won’t be long before I return…