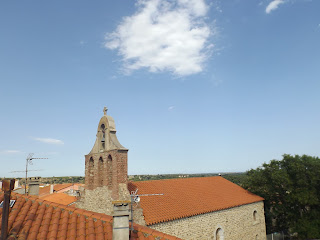 At 3.30pm yesterday I was doing a property viewing with clients and was showing them the spectacular view from the roof terrace.  I looked down onto the street below where a group of mourners were chatting outside the church, and discreetly waved to my partner, who had also attended the funeral with me….

Yesterday my friend Francis died.  He was the man who persuaded me to start playing tennis with the team of ‘old’ men in the village and made me feel so welcome.  As he lived alone (apart from his dog) I had called him in April to see how he was coping with the ‘confinement’ and he told me that he had been diagnosed with lung cancer and that his ex-wife had come back to look after him.  All the family were with him when he died, and they asked us to come to the house to talk about him.  I didn’t want to intrude but they really enjoyed hearing anecdotes about Francis – particularly the time he entered me for the village tennis tournament – in the men’s doubles team!

There was to be a church service for him at 3pm that very afternoon.  I wasn’t overly keen on the idea as I hate public goodbyes and also had the excuse of a property visit scheduled at 3.30pm but as the house just happened to be opposite the church, I realised that a) I would have time to do both and b) it would look bad if I said no and was then seen sneaking past the church later.

I wish I could explain a little about what a french funeral is like but due to the fact the two priests were wearing masks I couldn’t understand a word they said and just kept standing up, sitting down and saying Amen whenever anybody else did.  As we were sitting at the back I managed to sneak out as soon as the service ended and walked round the corner to meet my clients.

So that is how I said my final goodbye to Francis, at a respectful ‘social’ distance – 4 storey’s up – and I know he would have been amused.