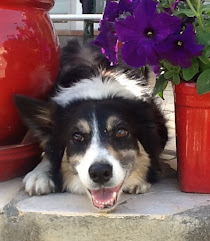 Due to various ‘incidents’ over the years I have had some experience of the french medical system, and the fact that while some doctors will prescribe vast quantities of strong medicines, others will recommend homeopathic and alternative remedies.  Which is why I should not have been at all surprised when the vet suggested I take my dog to a physiotherapist!

I’ve had Loulou, my border collie, for over 8 years now and as she was from a shelter it is hard to know how old she is but the vet reckons she must be at least 12 years old, if not more.  I have no idea how old I am in ‘dog years’ but we both seem to be a similar age.  We sleep more than we used to, have difficulty getting up in the morning, can’t walk as far as we used to, need to get up in the middle of the night, often find ourselves in the kitchen wondering what we went there for, and have a bit of arthritis.  The only differences between us are that I don’t fall over when I sneeze, she has to be lifted in and out of the car (I can do it on my own!), and she has a heart condition.

The last time we went to the vet for her heart pills I asked for some general advice on how to help an ‘old’ dog (obviously not to try to teach it new tricks would be the most important!).  I thought he was joking when he mentioned physiotherapy but apparently it is really a ‘thing’ and he told me about a place which specialises in ‘complementary medicine’ so I made an appointment.

The waiting room was very ‘Zen’ and peaceful – no smell of incense burning but there was relaxing music playing, pictures of nature and happy horses, and potted plants (on shelves, not at floor level for obvious reasons).  We were welcomed by the Dogteur who asked some general questions and then gave her a very thorough 45 minute massage.  At the end of it Loulou was fast asleep and snoring gently – and I was so jealous!

We were advised to keep her ‘quiet’ for the next couple of days, which was absolutely no problem as she showed no signs of wanting to exercise but just seemed to want to sleep under a tree in the garden – which is quite scary as she is also pretty deaf and doesn’t respond when you call so you have to keep going to check that she is still breathing!  I can’t say that she is a ‘new’ dog since the visit but it has certainly helped – and we will definitely be making a return visit as I see they also offer acupuncture, osteopathy, chinese remedies and psychology treatments.  But sadly only for animals…