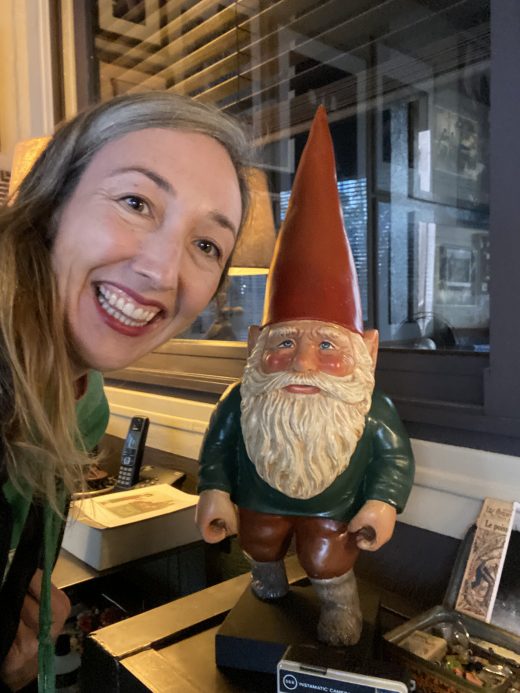 In 2001 I studied abroad in Paris. One of my favorite teachers—whose classes would go on to shape so much of the work I do today—took us to see the Jean-Pierre Jeunet movie Amélie that came out that fall. I’d seen many French movies at the time (it was a way I could get extra credit in my high school French class), but this was the first movie that saw the world more how I did (it was also one of the first French movies I’d seen that felt like had an actual plot line). 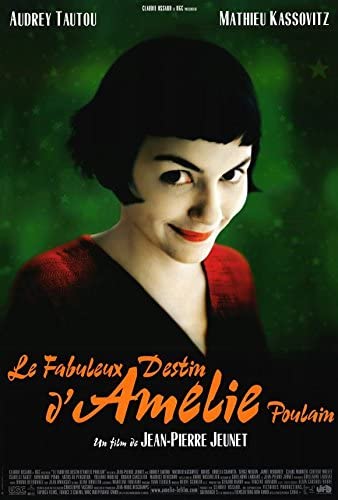 The movie has inspired me over the years. In grad school I explored the use of color in the film for a class project (and gave Amélie tours for a time), when I became French it was only fitting that I celebrated at Aux Deux Moulins (the café where Amélie works), and for my 40th birthday my friend Jenni surprised me with the most epic gnome cake EVER! I loved that it was full of quirky characters, where oddities were embraced rather than masked.

About 5 years ago I moved to Montmartre, Amélie’s neigbhorhood. This wasn’t so much a conscious decision—more one of convenience as a friend had an apartment I could rent—but perhaps the universe was at work. Three years into living in my apartment it was a sunny end of day. I walked outside and saw something caught my eye in the back of a room across the street. The front door was open too giving me a direct look. It was a gnome! I did a double take. It wasn’t just any gnome. I quickly realized that THE gnome from Amélie was my neighbor. 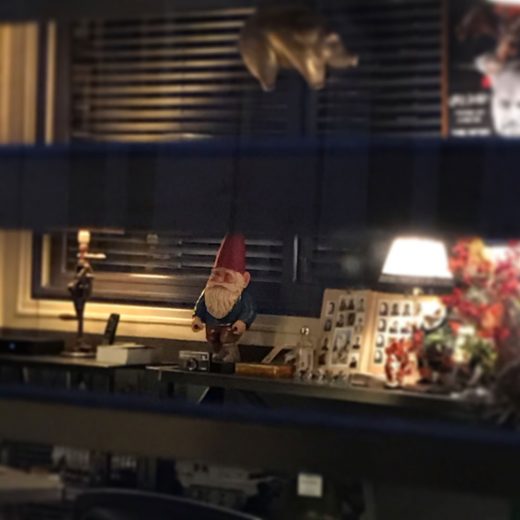 I wondered how I had never noticed this before, but then I realized the window wasn’t always open, and when it was the blinds were hung in a way that it wasn’t obvious, and most of the time the lighting was a way that you would never know, unless you KNOW.

So for 3 years I went through life with the dream of being able to MEET the gnome one day. I’d do my best to spot him through the window when I could, as a way of saying, “I see you and respect you, Mr. Gnome.”

The idea of meeting the gnome was a daunting task given that I didn’t want to be disappointed or rejected. Years prior I had met the director of Amélie. I told him how much I loved his movie and hoped one day he’d direct my movie about Paris swimming pools. Let’s just say the reaction didn’t inspire me, so I had this underlying fear I would leave disappointed again.

The other challenge was there were limited opportunities—and a year+ in lockdown—for this encounter to actually take place. The gnomes keepers weren’t always in. I knew it was something I didn’t want to force, so knocking on the door didn’t feel right. I didn’t want to interrupt the woman working at the desk. She had better things to do than answer to my fandom.

Then, two weeks ago when I saw her smoking a cigarette outside while wearing a hot pink jumper I knew this was my chance even though I knew I had somewhere to be. I didn’t have a chance to talk myself out of it, and instead with utter confidence I was my full self and in French told her I was a neighbor, three years ago I’d spotted the gnome inside, that I was not only a fan of gnomes (I showed her mine on my screen saver of my phone) but also of the movie. I said I was wondering it would be possible to take a picture with the gnome.

While I feared having to convince her, she took no convincing. She said, yes, whenever you would like. I did my best to play it cool, holding back my excitement and knowing deep down that if it didn’t happen today there would be more excuses for it not to happen. I played flexible, and then she said, “you can come take a picture now if you’d like.” “Mais oui, pourquoi pas I responded.” She said, one second, realized her cigarette was already finished, threw it into the street, and invited me in. For once in my life I was grateful French people still smoke.

I wanted to look at everything inside this magical space (like being inside the mind of the movie maker), but I took a b-line for the gnome. I wanted to respect her time and the space, and the gnome. It wasn’t particularly ceremonial—I was supposed to be meeting a friend—but thankfully I’ve been practicing selfies over the years. I knew I needed to take as many as possible to try to get decent shot. In the about ten I took, there were three good ones, but that’s all I needed. I could sense she was smiling and getting a kick out of my joy in this encounter. I wanted to photograph the entire space, but felt I needed to restrain myself to the mission at hand.

I thanked her, and told her about my love of movie props and how I’d taken an Annie Atkins workshop in Dublin (she worked on Grand Budapest Hotel). I told the woman that it must be so cool to work where she does. I properly introduced myself and told her my name was Anne (I never got hers), and thanked her for her time. Just like that I had accomplished my goal of meeting THE gnome.

I felt like Amélie as I left the space bounding to the next stop (cue Yann Tiersen soundtrack). I wanted to tell everyone I had met the gnome from Amélie, but I also knew not everyone would appreciate the excitement as much as I did. And that was OK. 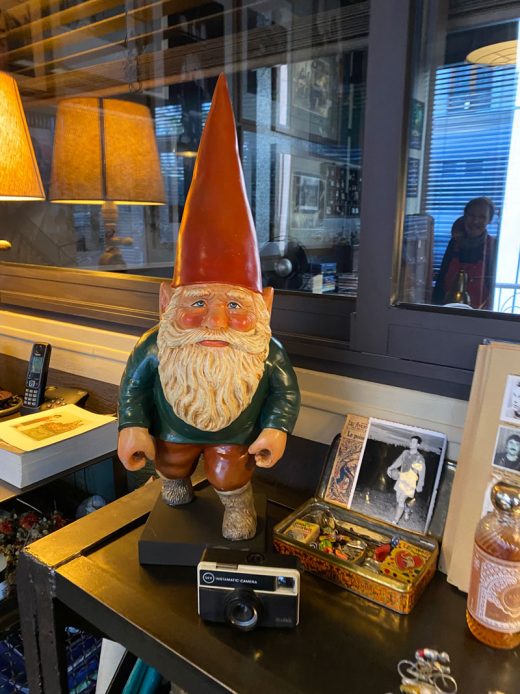 We never know what it’s going to be like when we meet our heroes in real life. Sometimes it can be disappointing, but other times it is joyous and better than you could imagine. We even can surprise ourselves in the process. I couldn’t help but think back to my sea swim and how doing something that scared me helped prepare me for this encounter. Asking for things we want/need/desire is hard, but we can be brave and good things will happen.

I wish I could have given the gnome a hug and held him in my arms, but hopefully this was only our first encounter, with more to come…

For now I am grateful for this day. And then something else awesome happened a few hours later… But that’s another post.