I was sitting on the front porch drinking coffee. ‘5 Ernest Hemingway passages that every gentleman should know,’ Alex read from his phone. “Only gentlemen?” and I raised my eyebrows, already put off by the over-used, formulaic title. But I had taken the bait. See, the marketers do know their stuff.

The first was a banal everyday scene set in Paris, which for some enables any prose to transcend the ordinary without undue effort.

The fifth passage was from ‘The Old Man and the Sea.’

Then, while the old man was clearing the lines and preparing the harpoon, the male fish jumped high into the air beside the boat to see where the female was and then went down deep, his lavender wings, that were his pectoral fins, spread wide and all his wide lavender stripes showing. He was beautiful, the old man remembered, and he had stayed.

At that moment, a cockatoo flew towards us, its wings wide like the spread fins of the male fish. Not striped lavender; pure white. The bird landed on our fountain, slurped, cocked his head and grinned. I’m sure it was a grin. It looked for all the world like he was seeking praise. “Ok. You’re clever,” I acquiesced as I turned my gaze coyly, alighting on a geranium standing tall. I had worked the ground in that spot yesterday, denying the sprawling lavender its unfettered claim, and clearing a space for the hedge it was using for support to push through.

The open face of the lushly red geranium was looking straight at the cockatoo.

“I can’t fly but I have strong roots and, if you stay by my side, I can stand my ground.”

Could it be that nature was sending me soothing messages after my disturbed dreams last night?

Please world, give peace a chance. 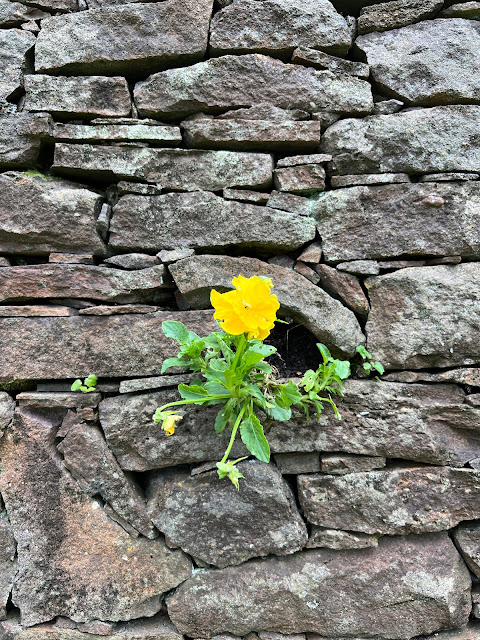