The first time Mrs. Harris sees the dress, she’s stopped in her tracks. She gazes at it, eyes full of longing, then floats toward it—as if on a cloud. The strapless lavender gown twinkles. It sparkles. It’s designed by Christian Dior. Mrs. Harris is in love. The object of her amour fou has a name—Ravissante. She’s probably never met a frock with a name before.

In Mrs. Harris Goes to Paris, coming to screens today, Ada Harris (Lesley Manville) is a cleaning lady in 1950s London. She sees the gown in the bedroom of a snooty client (Anna Chancellor, aka Duckface from Four Weddings and a Funeral!) who bought it in Paris to wear to her daughter’s wedding; she tells Ada it cost a whopping 500 pounds (and continues to forget to pay Ada for cleaning.)

Ada can’t get the dress out of her head. She has to have one of her own! She is a war widow of a certain age who spends her days cleaning other people’s homes and her evenings having a drink at the local pub with her buddies Vi (Ellen Thomas) and Archie (Jason Isaacs). One night, she sadly declares to Vi that they are “invisible women.” But now she’s seen la robe, and nothing can stop her. This invisible woman is determined to go to Paris and buy a Christian Dior frock. Everyone needs a dream.

Played by the talented British actress, Lesley Manville, Mrs. Harris is a hero who aims to inspire everyone around her—and audiences alike—to change their lives, pursue their passions, to go out and get that metaphorical Christian Dior dress of their dreams. Manville is most recognizable to fans of the director, Mike Leigh, who has cast her in such cinematic marvels as High Hopes, Secrets & Lies, All or Nothing, and Another Year. She was nominated for an Academy Award for her performance as Daniel Day-Lewis’ sister, Cyril, in Paul Thomas Anderson’s The Phantom Thread. Interestingly, the brother and sister team in that film are dressmakers who design fashion for the social elite in 1950s London.

Dreaming of her gown, Mrs. Harris saves her pennies and takes on extra work. She plays the lottery, even bets big at the dog races. Strokes of luck help her along, making the venture feel destined, something she deserves in exchange for all her kindness, hard work, and determination. 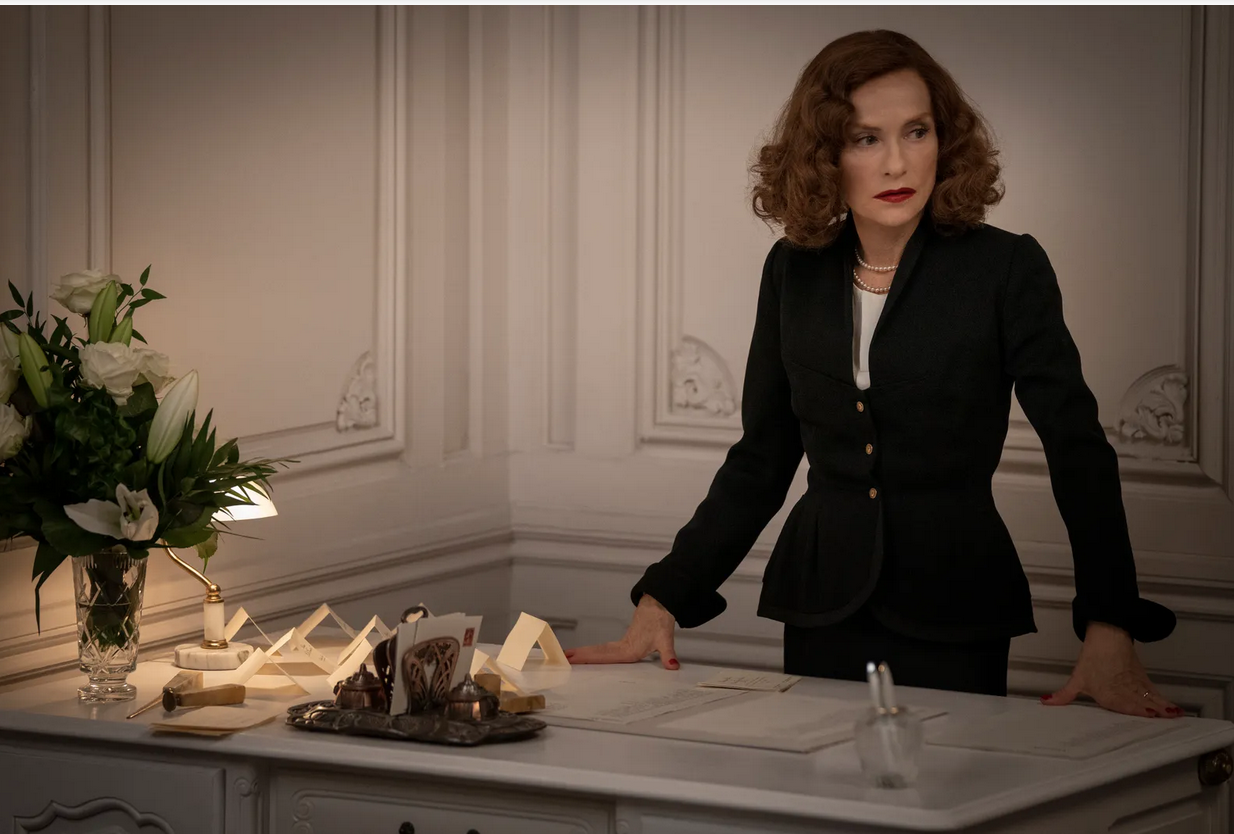 Once she’s reached the magical number, she gets her first-ever passport and it’s off to Paris, the most fashionable city in the world. Once there, she marches into the famed Maison de Dior and announces she wants to buy a dress—“one of them 500 pound ones.” Again, she is stopped in her tracks, this time by Madame Colbert, the impeccably-dressed gatekeeper played by Isabelle Huppert. Not just anyone can wear a Dior! Now Ada’s pissed: She’s got the cash, she’s come all this way, and she’s not leaving without her dress!

While Madame Colbert judges the frumpy exterior of our star, others are intrigued by the plucky cleaning lady’s grit and determination. The models peek at her through a curtain, eyes aglow, especially the angel-faced Natasha (Alba Baptista), whose purse Mrs. Harris rescued earlier on. André, Dior’s handsome young accountant (Lucas Bravo), offers to help. The dashing Marquis de Chassagne (Lambert Wilson) invites Ada to attend le défilé as his guest. The film’s fabulous clothes, many of which are reproductions of the designer’s iconic looks from 1947-1957, were designed by Jenny Beavan, who won the 2022 Academy Award for best costume design for Cruella. As the models strut and twirl down the runway, the magic really takes off.

We know from the start that the film is a fairy tale—by the way the rain glimmers in the opening shots and the puddles poetically reflect the light. The City of Light has never sparkled so brightly, the sky peachy and purple overhead—well, above streets filled with piles of garbage. In very Parisian fashion, the trash collectors are on strike! But the gowns…comme elle sont magnifique! When fittings begin for Ada’s custom dress, the flock of seamstresses buzzing around her reminded me of Cinderellas’s animal friends and helpers. Another character calls Ada her fairy godmother. 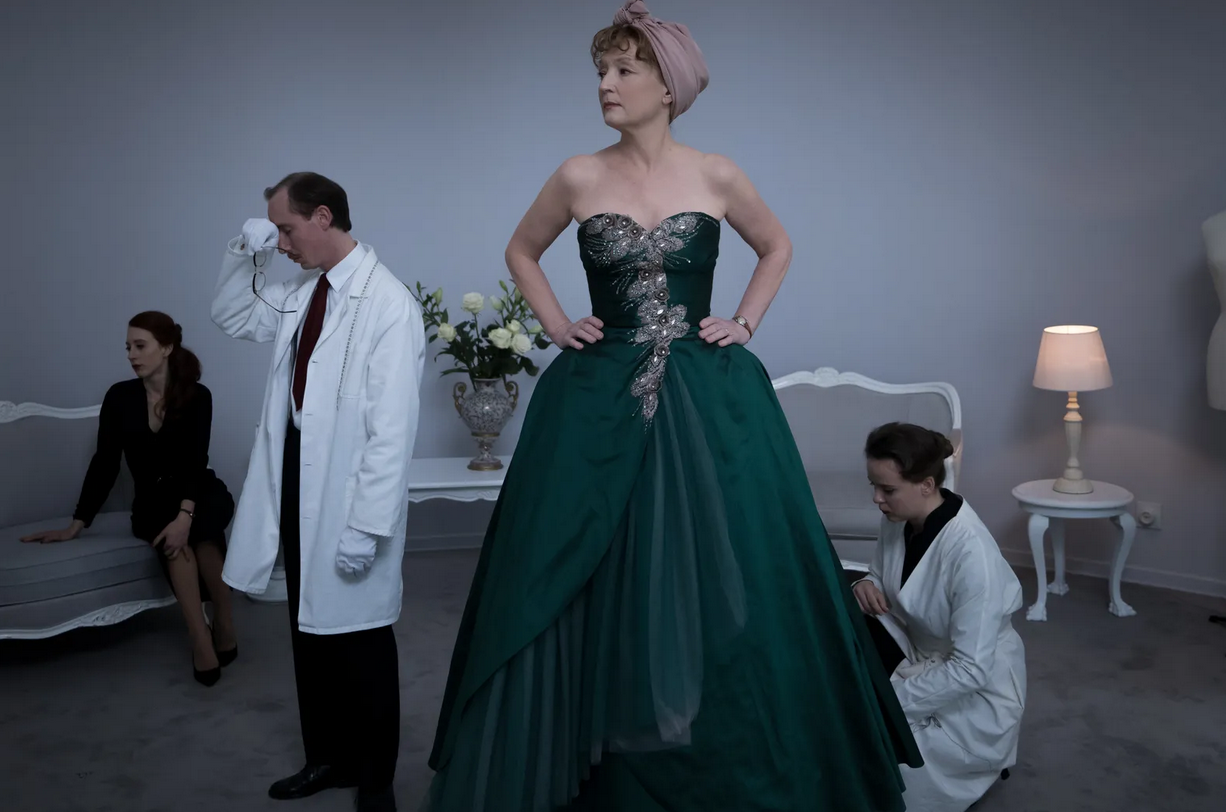 The story, based on Paul Gallico’s 1958 novel, took me back to Screenwriting 101. Any effective narrative begins with a character who wants something. Ada wants a Dior dress. Good choice: Very specific. She’ll have to work hard for it. Her desire will lead her on a journey to a new world with the potential to change her forever.

But the character also must need something. What does Ada need? In the beginning, she has no idea. Like any leading lady, she’s focused on her desire…she wants that damn dress! But her need, or inner desire, is something brewing deep down inside. It is the thing that will heal her wound, change her life for the better. Maybe this invisible war widow who’s spent years talking to her dead husband needs an adventure of her own, a love story perhaps? Maybe she simply needs to be seen. Ada would pooh-pooh the idea that there’s something bigger going on here. But somewhere along her journey, she begins to realize that she wants—that she deserves—more than a dress.

As the film’s tagline says, “The dress is only the beginning.”

Before Mrs. Harris can fix her own life, she starts convincing those around her to chase their own dreams, starting with the lovely Natasha, a model who’s more interested in Sartre than fashion, and André, the accountant who’s clearly in love with Natasha. Ada plays matchmaker, telling the adorable pair to get off their cute little French butts and make out already! She even leads a bit of a revolution at the house of Dior, making sure her new friends are treated well at work.

There are obstacles along the way. When Madame Colbert says: “A Dior dress is designed to astonish and delight. How will you do that, Mrs. Harris?” Ada is filled with self-doubt. “You are nobody,” Madame Colbert sneers, “invisible. How will you give this dress the life it deserves?” Strolling along the Seine with André at sunset, Ada sighs, “I’m only a cleaner from London.” He responds, “You’re a cleaner who dreams of the most beautiful gown in the world.”

Mrs. Harris Goes to Paris is a feel-good fantasy about following your dreams. To the cynical, this might sound trite, sentimental, but I say this is the kind of movie we need right now. The world is simmering with rage and despair. Sadness, anxiety and fear are the norm. Sometimes you just want a movie to show you something pretty, brimming with hope. You want to curl up and fix your eyes on something sparkly that inspires you to put on lipstick and heels and glide into a room and beam as heads turn.