Every vegetarian who’s visited France has had the experience of being treated like a second-class culinary citizen. From ordering a “vegetarian” dish that turns out to have bacon in it, to being offered a plate of plain roasted vegetables in place of a full meal, eating veggie in the land of duck confit and coq au vin can feel daunting. But there are a lot of protein-packed naturally vegetarian French recipes out there, as well as a few creative modifications on classic dishes. One of the simplest and most delicious boulangerie staples is the savory tart, an endlessly versatile meal generally topped with any variety of seasonal veg, and a hefty layer of cheese. To get the most out of high summer, try making a tomato tart. A cheese & caramelized onion tart is also one you’ll probably come across (use goat cheese, blue cheese, roquefort, fromage frais, or whatever you can get your hands on, but our vote is gruyère). For a dish where egg is the main protein power, you can essentially pick a cheese and a veggie and go from there. Ideal combinations include spinach and goat cheese, leek and gruyère, zucchini and parmesan, and onion and blue cheese 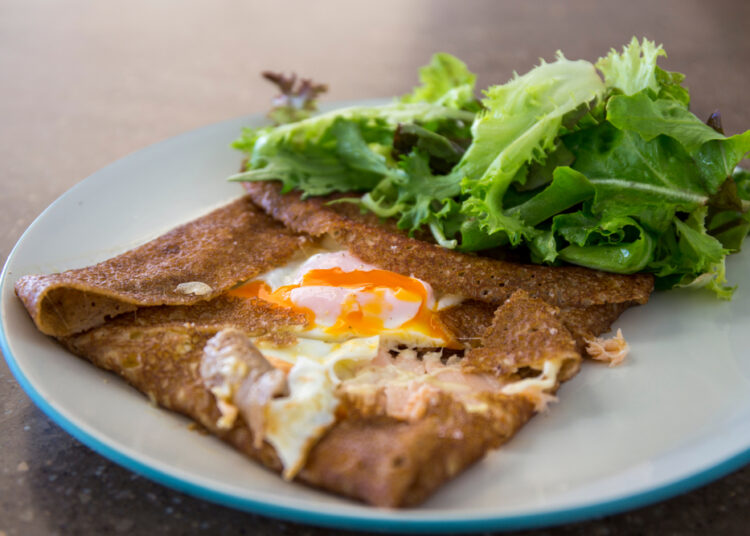 A crêpe or galette (buckwheat crêpe) can be an excellent vehicle for veggies, cheese, egg, or anything else you’d like to throw in. Try this version filled with mushrooms and spinach, but feel free to improvise as you see fit. Thanks to Disney (and Julia Child) this Provençal peasant dish is now one of the most recognizable names in French cuisine. And it’s all veggie, all the time. Tomatoes, eggplant, yellow squash, and zucchini are combined with crushed tomatoes and seasonings to make one of the prettiest one-pan meals you’ll ever eat. Tartare doesn’t have to be made with fish or beef. For a spectacular vegetarian take on steak tartare, we turn to chef Alex Gabriel for a recipe that involves tomatoes and red bell peppers. Though normally made with anchovies, this salty dip, a Provençal celebration of local olives, can be made fully vegetarian, by adding a splash of red wine vinegar to give it that extra flavor layer. All you need to do to enjoy this perennial French favorite in veggie format is substitute vegetable broth for the usual beef broth. Don’t forget bread on the side for dipping! Forget veal blanquette or sole meunière, everyone knows that the soufflé is the ultimate test of a home cook’s abilities. For those feeling up to the task, this recipe based on Julia Child’s is a marvelous showstopper you might want to audition the weekend before a big dinner party, before bringing it out to wow your guests the day of. Otherwise known as potatoes gratin, this cheesy, incomparable potato dish, crispy on top and gooey underneath, goes well with any meal. Shepherd’s pie, or hachis parmentier, as the French call it, is a hearty dish made from beef, mashed potatoes, and cheese. But this version uses lentils as a base instead of beef, because let’s be honest, under all that potato and cheese, you’ll hardly notice the difference. Beef bourguignon is French culinary canon, but that doesn’t mean it couldn’t do for a little 21st century update. Mushrooms, carrots, and pearl onions are already in the show, so why not make them the stars of this wintry red wine recipe? 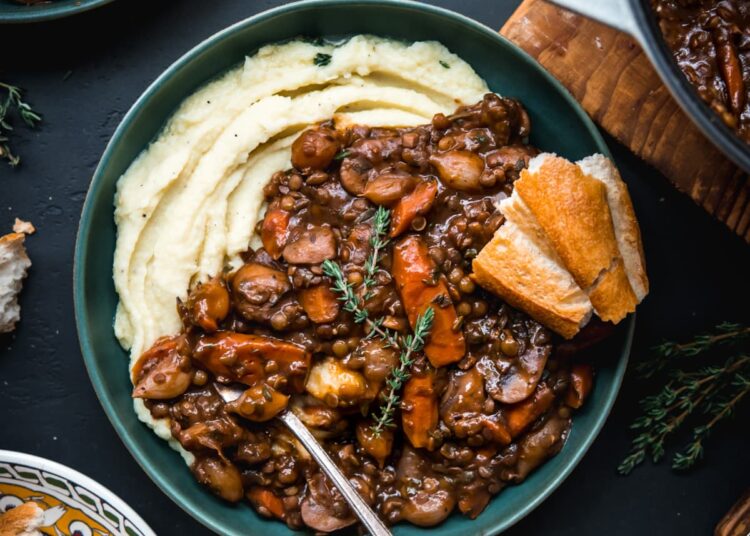 There are plenty of versions of coq au vin, which is already heavy on winter root vegetables and meaty cremini mushrooms, that allow you to omit the traditional chicken and pancetta. Some call for eggplant and tofu, while others suggest black beans and a hefty portion of potatoes. Tempeh bacon is always a plus.