In 1972, the German filmmaker, Rainer Werner Fassbinder, wrote and directed The Bitter Tears of Petra von Kant, a melodrama about love and loss with an all-female cast. The film follows the title character, a famous fashion designer, as she falls head-over-heels for a young woman and transforms her into a super model. Fame makes her young lover petulant, bitchy and unfaithful, and she ultimately leaves Petra alone with her bitter tears. Taking it all in is Petra’s doting live-in assistant, whom she horribly mistreats. 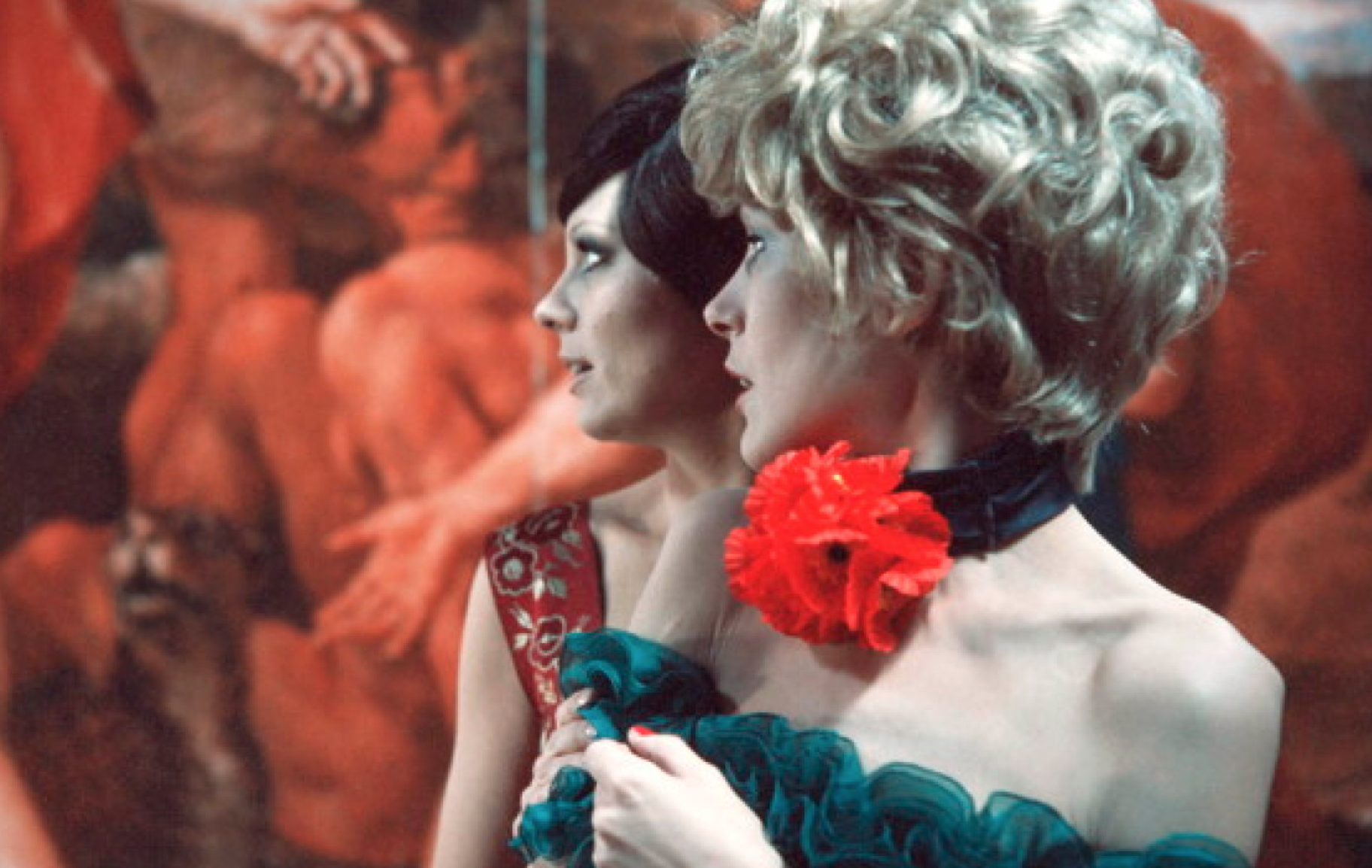 The prolific and deliciously audacious French filmmaker François Ozon (Swimming Pool, 8 Women) is a Fassbinder fan. His early film Water Drops on Burning Rocks transformed an unproduced play Fassbinder wrote when he was 19 into a naughty exploration of power dynamics in a relationship. Now Ozon has returned to the Sturm und Drang of the German master for his latest, Peter von Kant. The film is described as “freely adapted from Rainer Werner Fassbinder’s The Bitter Tears of Petra Von Kant,” but it is remarkably faithful to the original. The familiar skeleton is there, swaths of dialogue reproduced word for word. But it’s the “freely adapted” parts—and the performances, especially Denis Ménochet’s Peter—that turn this giddy spectacle into an irresistible camp confection both funnier and more emotionally engaging than the original.

Ozon jazzes up the proceedings first and foremost by turning Petra into Peter, a movie director modeled after Fassbinder himself in his physical heft, personal and professional intensity, and soaring emotions. Peter’s love interest, Amir (Khalil Gharbia), and beleaguered servant, Karl (Stefan Crépon), are also men. His bitchy one-time muse and current frenemy, Sidonie, played by the inimitable (and gorgeous as ever), Isabel Adjani, is still a woman—a gay artiste requires a girlfriend with fabulous frocks and eye makeup évidemment—as well as his daughter, Gaby (Aminthe Audiard), who returns from boarding school to celebrate his birthday. The big coup—I can’t be the only one who gasped—was casting frequent Fassbinder collaborator, Hanna Schygulla, who played Petra’s young lover in the original, as Peter’s mother.

It’s Cologne, 1972. Peter’s extravagant apartment is swathed in blocks of color—saffron, peacock, plum—and a couple of mannequins pose in the corner, in homage to Petra, painted a shiny red. Ripped from a dream by his live-in assistant, Karl, opening the blinds, Peter groans and moans, takes a call, pouts and groans some more (it’s his mom asking for money), and orders Karl to squeeze him some fresh OJ. Behind his bed is a floor-to-ceiling black and white image of Sidonie, the starlet he catapulted to stardom. Dragging himself from tousled sheets, he takes one of her records from its sleeve, places it on the record player and sways as the chanteuse performs a breathy version of Each Man Kills the Thing He Loves, her French-accented German reminiscent of Jane Birkin’s singing Serge Gainsbourg songs à la petite anglaise. At one point he gets so carried away, he waltzes Karl around the room before barking, “Right. Enough,” and abruptly turning off the music.

Then the real woman appears in the flesh. He and Sidonie haven’t seen each other in three years. She wants the dirt on his recent breakup and he obliges. From his point of view, the relationship ended because his partner couldn’t handle his professional success. With judgy Sidonie, Peter is volatile and self-righteous, spouting relationship wisdom both soulful and catty. Sidonie’s a cokehead. Peter insists he quit that crap ages ago. Quick cut to: him hoovering up a line. Coked up, the conversation turns spirited, the edits quicker, the characters rosy-cheeked and turbulent. It’s a party—or a fight in the making. Instead, another knock on the door: Amir, a new friend of Sidonie’s, a 23-year-old dreamboat, all bedroom eyes and bouncing curls. Peter’s eyes go soft and glassy. Visibly smitten, he orders Karl to bring cognac, invites Amir for dinner, his innards clearly turning to goo. In Amir’s presence, Peter turns childlike.

While Fassbinder’s film cuts deep, brittle and awkward, the same story in Ozon’s hands dances, maniacally, at times, shifting from stormy romanticism to manic emotion, sometimes within a single shot, with sparkling outbursts of anger and petulance. The film flies all over the emotional map. Replayed by the French bad boy du cinéma, Fassbinder’s dialogue is clipped, snappy (racing, perhaps, to keep the running time down?), its rat-a-tat-tat reminiscent of a screwball comedy or sitcom. Peter comes out with soulful insights about love and the human condition, but the words are energetically batted around like a ping-pong ball. I found myself one moment thinking, “wow, he is wise” and the next laughing out loud at deep thoughts being delivered in such a theatrical fashion. Oh, the drama! Peter is full of wise words—”the most beautiful things are fleeting,” “humans need each other, but haven’t learned to live as two”—and blunt declarations—”actresses are ungrateful idiots!”—spouted while gliding Amir around the room or guzzling another glass of gin. Then, suddenly, “Karl, bring champagne!”

Then there is Karl, the film’s most intriguing character, who sees all. The doting servant with slim hips, impeccable posture and all the best outfits gets barked at and shat upon. He writes Peter’s screenplays for him and sits tight when his demanding boss declares the pages “trop sentimental” and rips them in two. Karl never speaks, but his eyes communicate volumes. They widen when Peter’s impatience transitions to hysteria, blink in time with the popping champagne cork as he walks in on the lovers in flagrante delicto, and register surprise when Peter growls, “Karl! Shell his shrimp!” mid-romantic dîner à deux with Amir.

In a stunning scene, Karl operates the camera during an impromptu screentest Peter springs on Amir their first night together. As Amir tells his family’s tragic story, Karl is moved to rip the camera off the tripod and away from his assistant to move in for intimate handheld footage of his beautiful new friend. Within minutes, he declares, “We’ll make you a star” and kisses the young Romeo passionately. With the dramatic opening chords of The Walker Brothers’ In My Room, Amir dances for him, then with him. Everything shifts. The man who told Sidonie, “People are horrible. They can bear anything,” is putty in the younger man’s hands.

Nine months later, Amir has bloomed into a full-on spoiled brat, lounging languorously, paging through magazines, rolling his eyes at the advances of the man who made him a star. We feel the shift in power, see it in the tears brimming in Peter’s eyes. He turns pathetic, broken and begging. The moralizing self-confidence he displayed in Act 1 goes to shit and the man who claimed to understand the ways of the heart falls apart. “Je ne suis pas hysterique!” he shrieks. “Je souffre!”

His desperate cries of, “I love you! I hate you! I need you! You dirty whore! You disgust me! I love you so much!” reminded me of myself at 16. A grown man reduced to teenage melodrama.

In the midst of his suffering, in a tour de force, Peter dances alone—his open robe exposing his flesh—to Cora Vaucaire’s “Comme au theatre,” floor to ceiling images of Amir gazing down from his walls. “When I remember our love…the joy and the pain,” the song croons. When Sidonie, his daughter, Gaby, and his mother show up to celebrate his birthday, he spits his wrath upon them and showers them with shards of the glasses he hurls against the wall.

In a tender moment, Hanna Schygulla, as his mother and an emissary from the master Ozon so admires, sings her son a lullaby and we feel a ray of hope that was absent from Fassbinder’s version. Pushing outside the apartment for the first and only time—something that doesn’t happen in the original—we also get a glimpse of Amir without the man who discovered him, guided him, and loved him to distraction. In this moment, we think maybe he isn’t as tough as he seems. Ozon loves to dig into the shifts of power dynamics of love, the potential for cruelty and tenderness, and remind us that nothing is ever solid or static when it comes to romance. Like a vessel on a stormy sea, in love we are all susceptible to the whims of the winds, the currents, sudden movements that are impossible to predict.

Peter von Kant opens in theaters on Friday, September 2. The Bitter Tears of Petra von Kant is streaming on HBO Max. I recommend watching them back to back. The Fassbinder will make you twitch and squirm. The remake will make you laugh out loud. You might be inspired to watch everything the two directors have ever made. Pop a bottle of champagne or mix yourself a stiff martini. As Peter would say: Próst!