Late afternoon most days Jerrod grabs a rectangular leather bag containing a trio of steel boules, and heads off to play Pétanque. He returns a few hours later, a little tipsy, and speaking better French than I do. I should clarify: speaking better bad French with confidence and esprit. I speak better proper French, accompanied by many tortured pauses as I grimace and sweat and rummage around for the correct verb with which to conjugate the passé composé. Jerrod doesn’t really even know what the passé composé is. He’s figured out that as long as he attaches a time signifier to the front end of a sentence, it doesn’t matter whether his past tense is composed. Yesterday, I go to the store. Tomorrow, I go to the store. Sometimes, he foregoes the verb altogether as in Yesterday, I store. Contrary to the stereotype, none of his many French friends and acquaintances seem outraged by his enthusiastic butchering of their splendid language.

Jerrod had no French before we moved to Collioure three years ago. I had had two years in middle school, four in high school, and a year in college. I loved French, even at thirteen, when to try on the uvular trill of the French ‘r’ in class guaranteed that the only way you would ever sit at the popular table would be in witness protection. I wrote a book about Coco Chanel in 2008, and was able to get the gist of research materials that had not been translated into English. Still, like many Americans who learned French in American public school, my speaking and comprehension skills suck. I understand about half of what is said to me. And the second someone addresses me, I’m seized with stage fright. It’s show time! My heart races. My mind goes blank. It’s the real-life manifestation of the familiar nightmare, where one day you go to class like usual and there’s an important exam no one told you about. 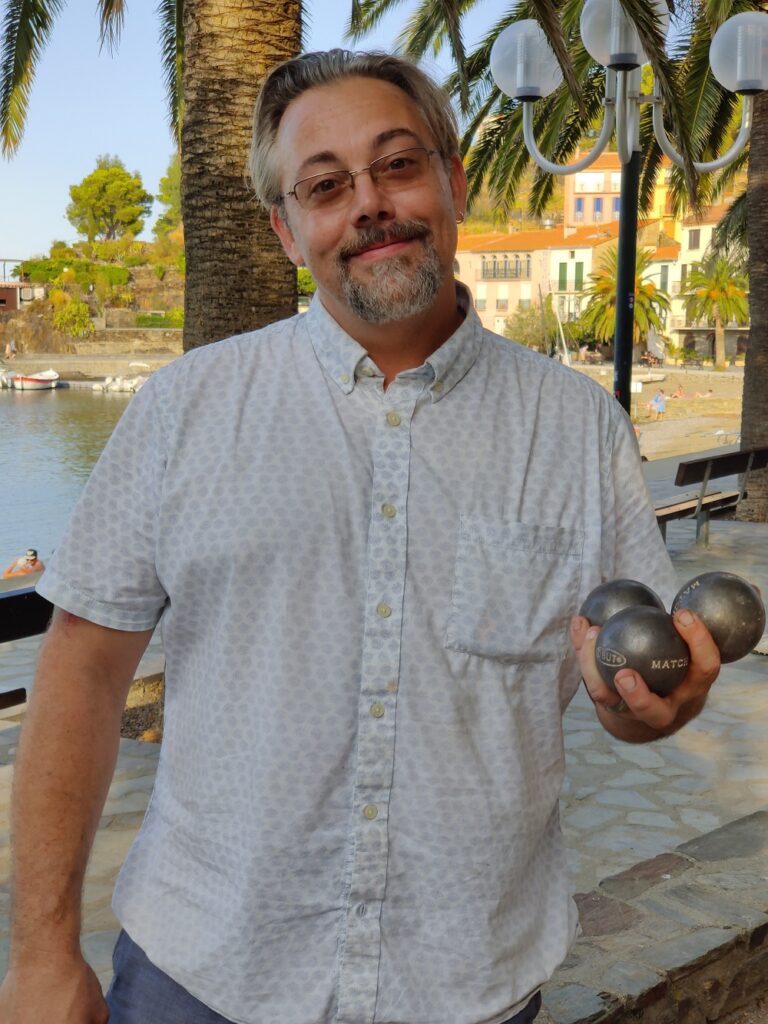 It’s annoying in the extreme.

People say it takes one year of full immersion to “speak” another language. I don’t know who came up with this arbitrary time span, but it’s utter B.S. It might be true if you were a contestant on an episode of Survivor: Lingua Franca!  in which international competitors are dropped into an off-the-grid land where no one has ever heard of the English language, and the  challenges involve communicating the desperate  need for a toilet, or a cheeseburger. Because as much as I hate to admit it, English reigns supreme. Like cockroaches and bad covers of “Smoke on the Water,” English speakers can be found in every corner of the globe.

It takes daily determination to avoid speaking English – here in Collioure, anyway — coupled with a high tolerance for looking like a complete idiot in French. I find that every day is a struggle not only to parler français but to find opportunities to do so. There are a lot of convivial Brits in this part of France who love to get together. They have hiking clubs and cooking clubs and swimming clubs where, obviously, English is spoken. There’s a small Norwegian population here who speak English, and young French people who like practicing English. English is cool, to the young French.  Jerrod and I don’t mean to be unfriendly, but we often run away from apéros where everyone speaks English. There are only so many hours in the day. And if we’re going to spend six of them getting schnockered, we want to do it in French. 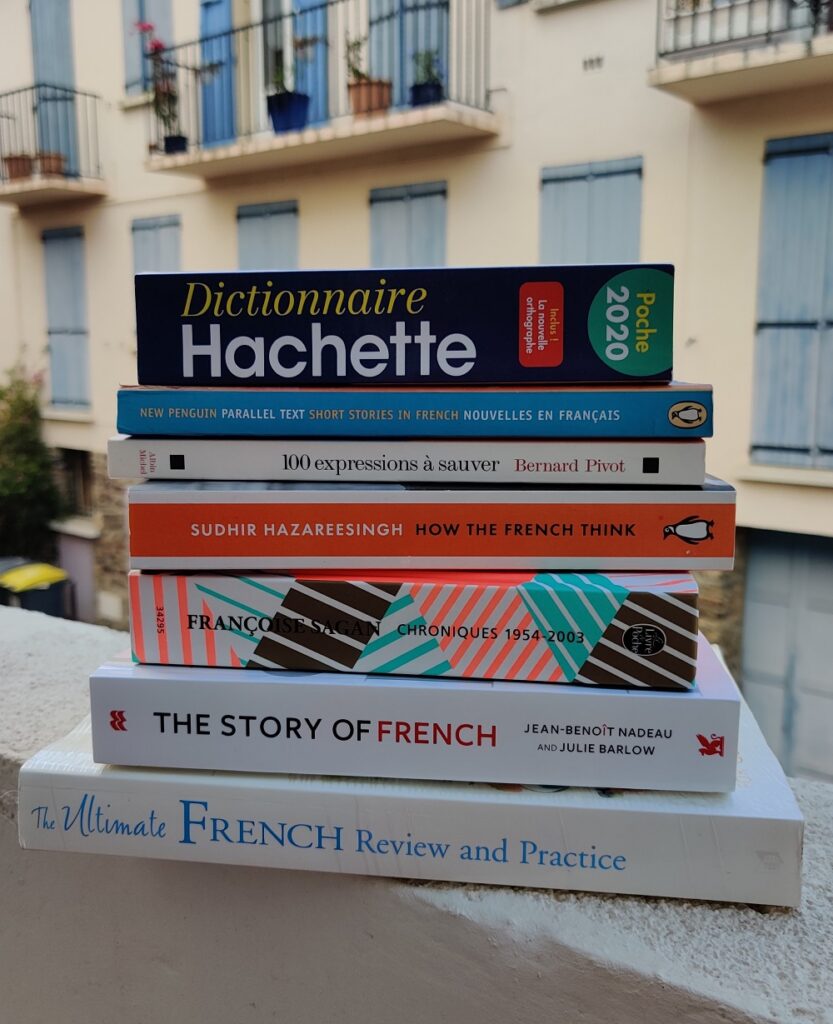 A month after we moved to France my friend, Valérie, a French woman, took me to a gym she’d found online. Collioure, with lovely hiking trails two minutes from town, scenic routes that appeal to the road cycling crowd, and gentle sea perfect for lap swimming, is already a sort of gym, so you have to go to the next village over to find the indoor variety familiar to Americans. This indoor gym has been airlifted straight from 1985: A TV mounted above the resistance machines and stationary bikes plays videos of Bon Jovi, Robert Palmer and Kenny Loggins (Danger Zone!) on loop. Posters of female body builders with their shellacked-looking abs in their ridiculously skimpy bikinis are thumbtacked to the brightly painted walls.

Twice a week the first summer we lived here, Valérie and I went to exercise class at the 1985 gym. There I learned that in French a lunge is called a fente and a squat is la flexion sur  jambes and jogging is le jogging. Do you know the one where you lie on your side, legs bent, ankles together, and open and close your knees? It’s called a clamshell in English; in French it’s a portefeuille, a wallet.

In the process, I fell further in love with French, and like all unrequited lovers, became even more tongue-tied around the object of my affection. 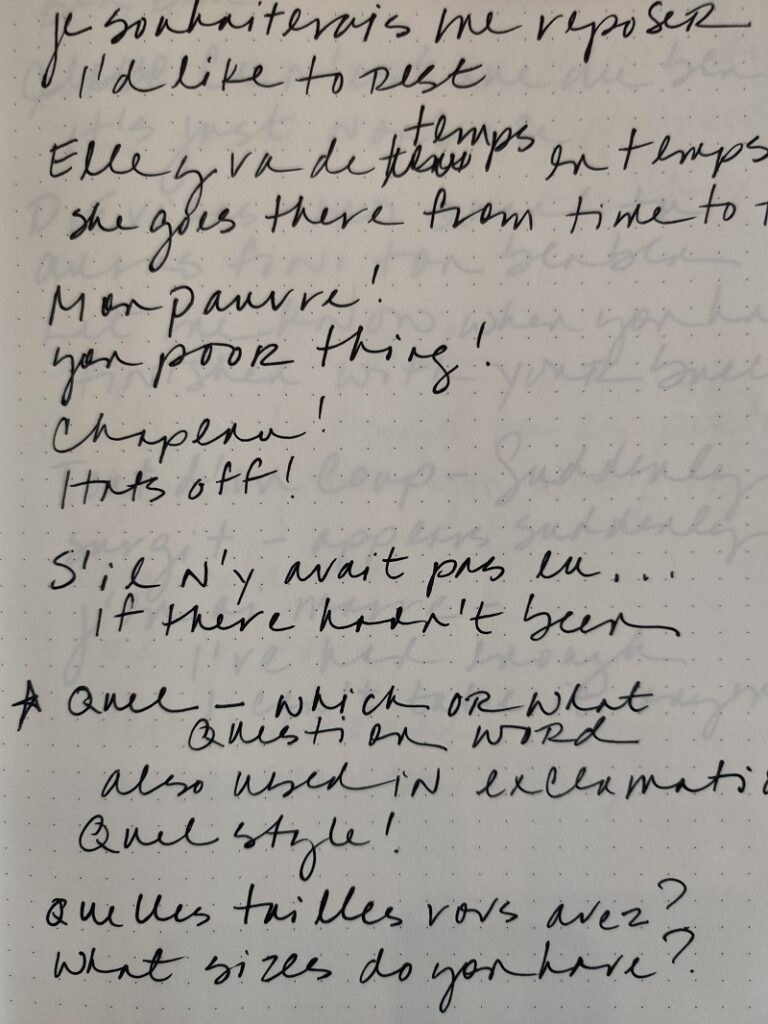 Did you know there are roughly 130,000 words in French, according to the French dictionary Larousse, while English boasts 470,000 words, according to Merriam-Webster online? During its development, English hoovered up words from Latin, Greek, Norse, and yes, French – more words than it would ever need. English is the language of synonyms. For example (par example): in English we have help (Germanic) and assist (French) and abet (Latin) and aid (more French). Indeed, a whopping 40% of our vocabulary comes from French. Think of words like information (informations), optimism (optimisme), adorable (adorable). As our friend Marc says, “say a long English word with a French accent and probably it is correct! You win!”

French is considered by many to be the most beautiful spoken language in the world (to be fair, Italian is right up there, too). Spoken well, French sounds like a burbling brook. Sometimes, when I sit amongst the French, I think they’re just singing to each other, all day long, and there is nothing they would rather do.

A week after we moved to the rue du Soleil, while I was reading more, studying more and feeding my stage fright, Jerrod received his first invitation to play Pétanque. The popular image of Pétanque is a gang of the oldest men you can image in caps and wool coats standing on a field of dirt, staring down at what appear to be croquet balls. It’s like the more well-known Italian game of boule, only with Frenchy rules.

There is a serious amount of standing around in Pétanque. Standing around waiting for another player to pointer (throw their boule at the target, a small wooden ball called a cochonnet) or tirer (knock someone else’s boule out of the way with their own). Standing around discussing whose boule is closest to the cochonnet. If there’s a debate about the distance, there’s still more standing around while someone produces a thin string to measure it. 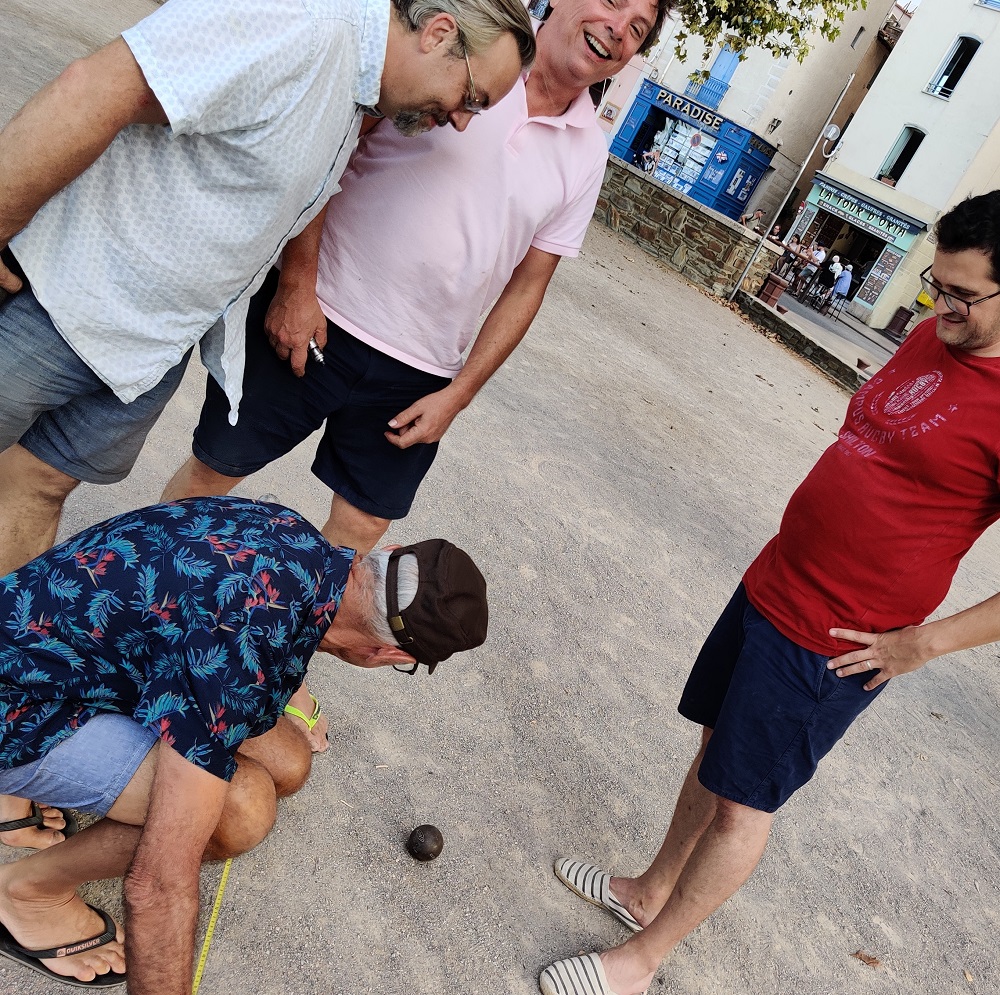 Pétanque is boring enough and easy enough so that there’s a lot of time to shoot the shit, and it’s always shot in French. The weather. The current influx of tourists. The mayor’s plans to relocate the boulodrome. How are feeling after your latest vaccination? How was your sailboat trip to Costa Brava? Your friends from Maine just came for a visit; how did they find Collioure? After a game or two or five, there is always an apéro. It is a dull game masquerading as a free, daily French lesson which ends with drinking, bien sûr.

Even though traditionally, Pétanque is a geezer’s game, we’re a modern crowd here on the rue, and women are permitted, indeed welcome, to play. Last summer, during the end of a longer than average apéro I joked that over the winter I was going to learn to play Pétanque. “Jerrod and I will practice every day,” I proclaimed.  I will learn to throw the boule! I will learn to make the point! I will learn to win the game! I will I become the mushroom of the world. (Instead of saying champion, which is exactly as it sounds, I threw in an extra nasal sound and the word came out champignon, or mushroom).

I said all this because I was a little drunk. I said all this because I could say it. Another little-acknowledged detail about language acquisition: You wind up saying a lot of stuff you don’t really mean, only because you’re sick of sitting there mutely nodding your head like a well-behaved retriever, and want to contribute something, anything, to the conversation. I had no real interest in Pétanque but in that moment I didn’t care. I could converse about it and that was enough!

But now I was committed. Unlike Americans, the French aren’t a big just-thinking-out loud-here people. They don’t verbally float an idea, try it on for size, see how it sounds. They don’t say, “Oh my God, we should totally go skiing sometime!” Meaning, “I like you and I can imagine we might have fun doing some outdoorsy thing like skiing but we’re not going to actually do it. I don’t even meet people for coffee anymore.” You say something like that to a French person, and they get out their calendar and start waxing their skis.

So, last winter,  I learned to play Pétanque.  It took about twelve minutes to learn the rules. That day we played three games and during those ninety minutes or so I cured my stage fright. (Or, some of it. Let’s be real.) The key was focusing on playing the game, not speaking the language. Tossing the boule distracted me from my terror. Quickly, I learned to holler “tellement jolie!” when someone made a great shot. I learned how to complain about the various invisible bumps and sandy patches of the terrain. I learned how to cuss appropriately when I badly overshot or undershot. I learned how to gab about everything and nothing. Did you see the new cinema is open? I hear we’re supposed to get some heavy rain. Are you still swimming? How is your puppy? When are the truffle salespeople going to be at the market? Do you have any trips planned?

I still don’t play as much Pétanque as Jerrod does.  Nor do I speak as freely and unselfconsciously as he does. I still have stage fright. And he will still talk to anyone who will listen, and still finds the inclusion of verbs in a sentence to be mood dependent  Pétanque is, year after years, his daily devotion. He rarely misses a game. Even on a dark winter’s day, when the Tramontane whistles down from the northwest and the village is empty, he will show up and bumble along in his special dialect of French  to play with anyone who has ventured out. He is, after all, the world mushroom of Pétanque. And bad French, too.

Karen Karbo is a frequent contributor to Frenchly. Her 2021 essay, Au Revoir Thanksgiving was the germ for this column, Rue du Soleil. Karen is the author of fourteen award-winning novels and works of non-fiction including the international bestseller, The Gospel According to Coco Chanel. Her essays, articles and reviews have appeared in Elle, Vogue, O., The New York Times, Tin House, Salon, Slate and elsewhere. To connect with her, buy her books, and learn about her writer’s retreat in Collioure, please visit her website here.